Nobles from Aquitaine had a reputation for being fashion conscious, and the new queen shocked Louis’ courtiers with her jewels, kohl, and rouge. Chronicler Bernard of Clairvaux remarked that her gowns were “not so much adorned as loaded down with gold, silver, and precious stones.” She was said to be tall and extremely beautiful and continued to enchant men across the known world into her old age. 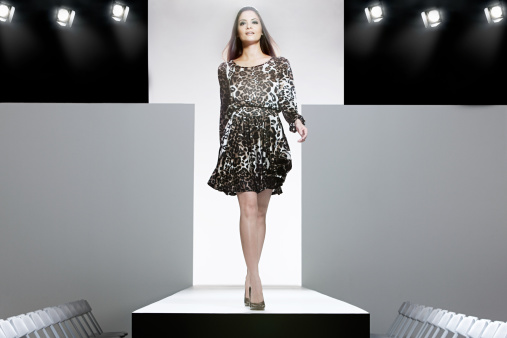 Setting the trend. Under her influence, women’s clothing became increasingly elaborate. The bliaut, a long overgrown, was a new trend. In Eleanor’s reign it grew tighter around the bodice, fitting snugly down to the hips, and was worn with a decorative belt or girdle. The bodice was split down either side from underarm to hip and attached with ribbons, which could be tied to tighten the fabric across the body. The skirt was cut wide, falling in light folds and pleats down to the feet. This emphasized the conspicuous use of rich fabrics.

Silk from the Middle East was readily available throughout Europe and used extensively by the royal court. In a palette of blues, grays, burgundies, and earth tones, the silk was highly embellished and heavily embroidered in costly metallic threads. The garments’ sumptuous flow outraged church fathers: Bernard of Clairvaux complained about the ladies at court who “drag after them trains of precious material that makes a cloud of dust.” Bliaut sleeves also drew attention; they were tight from shoulder to elbow, then flared out into enormous cuffs long enough to drag on the ground.